I had two rugs from my mom's house I had been meaning to clean for the last year. One had been in our garage for a few years! Both needed aggressive dusting...

I'm so impressed with the easy quote process and quick pick up of my rug.
The rep who picked it up (Robert) was professional and knowledgeable of the...

I contacted Gentle Genie by text on Jun 12, a Sunday, when I knew they were closed. I researched the company & read reviews of their services. The following morning, I received a text with a price quote for an expensive silk rug from Turkey that is 123” x 87”. I explained that I’m moving soon & needed it back cleaned no later than 11 days later. Although their usual turnaround time is two weeks, Livingston arranged to have his driver Robert pick it up the following day. Robert arrived promptly in his truck bearing the company’s name. He provided me with his business card and gave me a very thorough explanation of the whole process from pick up through cleaning & delivery. Since I had watched the video on their website, I knew that Robert’s explanation was consistent with the video. I opted for the application of Scotchgard because I expect that it will be in storage for several months & would get heavy traffic after that. In light of our moving date, he agreed to an expedited service & delivery. As he promised, he arrived promptly after giving me a couple of calls regarding his ETA. The rug was well packed for a long distance move but he showed a portion of it to me. Although I’m very pleased with the completely professional service so far, I plan to write an updated review after a few months of heavy foot traffic in our new home. I sincerely recommend this company to my family, friends & neighbors.

Very nice people to work with but my rug repair was not at all what I expected. The rug is a Persian cut pile rug and the repair is large loops and stands out more than the original hole. I was not told they couldn't repair the rug with the same type of yarn and stitch in the rug. Very disappointed. I will need to replace my rug.

Follow-up. They went from 1 star to 5…or 4.5 to be more accurate. After hearing my complaint, they took my rug back and repaired it so well that I can’t tell where the hole was! My only complaint now is that they should have caught how horrible the first repair looked before they returned it to me. However, they have been so nice through all of this that I’m keeping them at 5 stars. Good customer service is hard to find and they truly have been so kind to work with. Thank you Gentle Genie!

Although my rug was pretty much ruined because of dog stains, they did a great job at taking out the bad smells and removing some of the easier stains. They were professional and great at communication. They helped me put my living room back together which I greatly appreciated. I will very definitely use them in the future!!

Great job Gentle Genie! Prompt courteous service from the initial phone call with Helen to the clean area rugs placed on my floor. Thank you.

Gentle Genie is terrific-does a careful and thorough job cleaning my Oriental carpets, provided repairs, and custom pads. Service was absolutely as described up front, great communication with pickup, delivery and costing, and super-friendly personnel! I recommend them with highest level of confidence.

Please Leave Us Your Feedback 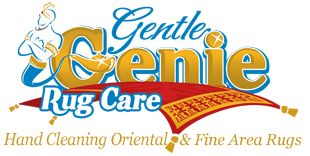